My first and only trip to India was in 1999 and as India does for many people, it taught me how deep our assumptions and cultural differences are.

I was the leader of a band invited to perform at a festival for the Dalai Lama in Bangalore. The band consisted mostly of my former band ASZA with Nancy Fisher (now Mortifee) as a vocalist. Nancy was the catalyst for the invitation as she was a founder and Director of the now defunct Vancouver Sacred Music Festival.

Our first stop was at a prestigious club in Bombay called Jazz by the Bay. As a favourite haunt of Bollywood stars, I was surprised upon arrival how small it was for the reputation it had. As concert time approached it quickly filled up to slightly more than capacity with an appreciative crowd and we had a great show. After our performance the promoter, with great pride, introduced us to a number of prominent stars, none of whom we recognized or had any knowledge of their fame. It was an odd feeling to know that we were being honoured in meeting these stars, but having no clue who they were! But we all smiled nicely and looked impressed.

The next day started with a tour of a state-of-the-art multimedia centre and recording studios. They were extremely amazing and quite far ahead of anything we had seen back home. Yet as we were leaving, just a few steps outside the door, I witnessed a homeless person crawl out from under some boards in a back alley to drink out of a mud puddle after a recent rain. The contrast was shocking, and I didn’t really know how to handle it emotionally.

The following day we travelled to Bangalore and were well taken care of by the festival. Our hotel was quite modest, clean and comfortable except for the 4-inch wide crack running floor to ceiling down the wall of my room. I had heard on the news that many hotels in the region had collapsed due to poorly mixed concrete and this crack was very concerning. Somehow, I was already getting used to India so I wasn’t that worried as my bed was on the door side of the crack so I felt fairly comfortable with the possibility of waking to an open-air room.

Our group was assigned a young Tibetan handler by the name of Pema, who took care of all our needs and accompanied us everywhere. As the leader of the group I often needed his help in organizing schedules and technical requirements. Pema certainly made India easier to handle and over the next few days I spent a lot of time with him, and I felt we became good friends.

Pema met us each day with a driver to shuttle us to the gigs. We were very thankful for this as navigating traffic in India is an “art.” One particular amazing driver was taking us to the venue at the peak of congestion in a large bulky passenger van. Not far into the drive, we approached a bridge with two lanes in each direction. The two lanes on our side were totally clogged with three rows of bumper-to-bumper traffic. The oncoming traffic was stopped at a light on the other side of the bridge. So our driver casually drove into the oncoming lanes to get around the stopped cars. As I was the only person brave enough to sit in the front seat, I saw the light change and three buses side-by-side barreling towards us at full speed in the two oncoming lanes. There was absolutely no room in our lanes to get in and no room between the oncoming buses, so I sat back in resignation to see how this potentially life threatening event would unfold. Our driver continued to drive straight at the oncoming buses and politely asked me to pull in the passenger mirror, which I did quickly. At the last second he pushed into our lanes and everyone compressed to allow for him, with the buses also compressing a bit to just allow for seven vehicles to span the four lanes. In amazement I watched as the bus sped past my window with only an inch between our vehicles. Indian drivers are world class!

The festival had a large self-serve cafeteria that provided food to all the performers, volunteers, and monks, which made it a prime location for cultural clashes. Every meal there would be a giant line with a hodgepodge of nationalities wearing T-shirts and cutoffs interspersed with red-robed monks. The monks were obviously very used to close physical contact and pushing in line. One of our band members felt very uncomfortable when a monk behind him was slowly but constantly pushing with full body contact. Obviously, the monk had a very different concept of personal space. I handled the situation by standing sideways in the line and the monks were confused enough by this to give me space.

The highlight of the trip was an invitation to meet with the Dalai Lama. Sitting in the waiting room, one of the Dalai Lama’s staff came and told us to get ready, but that Pema would not come in with us. We discussed this between ourselves and decided that if Pema was not allowed in then we would not go in either. This caused quite a stir and our meeting was delayed, but finally a decision was made to allow Pema into the meeting as well.

We were not prepared however for Pema immediately prostrating himself on the floor in front of the Dalai Lama upon entering the meeting room. The Dalai Lama was also a bit taken aback and embarrassed, quickly encouraging Pema to stand. We were asked to sit on chairs arranged in a circle. Pema put his chair well back outside 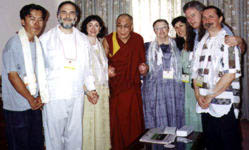 of the circle, but I quickly pulled him in line with us and said to him “Pema, you are one of us.”

The Dalai Lama was quite personable and spoke to each of us individually for a few minutes. He was everything you have seen him to be, warm, compassionate, extremely intelligent and well informed. It was clear that he was seeking out help in supporting his people’s cause. However I noticed that as he went around the circle to chat with us foreigners individually, he did not talk to Pema. I was a bit confused by his skipping Pema, thinking maybe Pema would be talked to last. So when the Dalai Lama started speaking to us as a group, I interjected “Excuse me your Holiness, it appears that you may have forgotten our good friend Pema.”

I was a bit taken back as the Dalai Lama gave me a hard stare followed by a stern challenging response: “Is he really your good friend?” It seems that I had overstepped my bounds and that the Dalai Lama was not used to being questioned. However, throughout my life I have progressively learned to dislike hierarchy, and I was no stranger to being challenged. So I replied mirroring exactly his tone and stare: “Yes, he is our very good friend.” At which point the Dalia Lama nodded and then spoke directly to Pema in Tibetan.

I was surprised at this scenario. The Dalai Lama knows the West well and also is aware that many people in the West are firm believers in equality. I would have thought that the fact that we insisted Pema enter with us would be a clear sign that we had accepted him as an equal. We were all well aware of the hierarchy within Tibetan Buddhist orders. However, as the Dalai Lama was asking for our help in supporting his people, his inclusion of Pema in the conversation without being asked would have been a powerful demonstration of his humility and love for his subjects. I guess I should not have been surprised though, as the Dalia Lama is the head of a very large order of monks and as the pinnacle of a hierarchy he is an authority figure used to wielding power. We usually don’t see this side of the Dalai Lama, as his most powerful public image is that of a humble man. Our insistence at having Pema join us inadvertently gave us a glimpse behind that image, as it is quite difficult to appear humble with someone prostrating before you. Yet the Dali Lama was a gracious host, and very well spoken, and we all felt it a privilege to spend personal time with him.

Upon leaving out meeting Pema rushed down the hall well ahead of us. I caught up with him at the elevators and found him wiping his tears. It was at that point I realized how deeply the meeting with the Dalai Lama affected him. He had just met his God.

Almost everything in India was a culture shock, and often the shock was so deep that it shattered some of my deeply held cultural biases. I can’t say I enjoyed India, and I can’t say I hated it, but I do think that everyone should spend time there. India tends to throw reality in your face, forcing you to confront everything: your emotions, your cultural biases, even your own mortality. Add to all that the overwhelming crush of humanity, India is so overwhelming that it is understandable why there is a deeply held belief in reincarnation there, because for many it is almost certainly too much to handle in one lifetime.

2 thoughts on “India and the Dalai Lama”