Visiting Kyushu, the southern island of Japan in 1989, I was hoping to find a place to study Gagaku, Japanese court music. I was interested in playing the sho, a bamboo mouth organ used in this genre. Fortunately, I discovered that a new Gagaku-do (a place to perform or practice Gagaku) had just been built at the Shogyoji temple in Kasugayama just south of Fukuoka. This was a spectacular new hall that had a permanent stage for Gagaku and Bugaku (the accompanying dance). They were also setting up a school to teach Gagaku and were very excited to accept me as a student.

I began my studies with a very patient young teacher who taught in the traditional, slow but methodical way. After a month of playing only one chord, I was honoured to be invited to take part in a special weekend workshop being led by Ono Tada Aki, the National Treasure for sho. Attending the workshop, I was surprised to find Ono-sensei (sensei is an honourific term for teacher) taking an interest in my playing. I guess he sensed my familiarity with mouth organs as I had already played the Thai mouth organ (khaen) for over ten years. After he found out that I could only stay and study for a short period of time, Ono-sensei focused a lot of the lessons towards me and I was shown all the traditional finger and breathing techniques and my teachers were instructed that I should leave Japan with all there was to know about the sho. Ono-sensei went on to personally show me how to maintain and repair the reeds, something few sho players do themselves these days.

After Ono-sensei’s departure, I was given a new teacher, the top sho player in the school. This was quite an honour for a new student, however he had just been in a severe car accident. He would leave the hospital specifically to give me a lesson, and then return directly to the hospital. It was difficult for me to see my teacher sitting across from me in great pain, and I pleaded with him to postpone my lesson until he felt better, but he just thanked me for my concern and continued the lessons. I tried to do everything as quickly as possible, and play as best as I could, so we could finish the lessons early, but no matter how much I did, he kept teaching until the full time was up. He continued to leave the hospital to teach for the next few weeks, and never once would give in to my pleas to postpone or at least shorten the lessons. During this time I worked harder than I ever had before. I wanted every minute of his pain to be worthwhile. I progressed quickly, but still felt that I had barely scratched the surface of understanding Gagaku.

All too quickly my departure time grew near. I was due to leave on January 4th, and was invited to attend the first New Years Festival to be held at this Gagaku-do as a kind of going away party. The New Years Festival is a very big event in Japan and is the time of year when Gagaku musicians are in the greatest demand. This was an especially important event as it was also the inaugural New Year’s concert for this new hall. However, many of the Gagaku performers were doing concerts around the island of Kyushu, and would not be at that evenings performance. I was therefore asked to come early to the celebrations so I could say goodbye to everyone before they went off to their performances. Upon arriving a number of my teachers carefully inspected the new sho that I bought, and asked many questions about my future plans for using the instrument, and when I would return to Japan. One by one they said there goodbyes, and I was finally left alone with my teacher. He turned to me and asked if I planned to stay for the evening celebrations. When I said yes, he said that I didn’t have much time, and I must hurry to change. 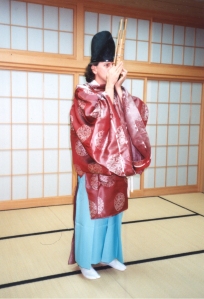 I was taken upstairs to find a set of traditional performance clothes waiting for me. The Gagaku-do had searched all over Japan for clothes that would be big enough to fit me, and hadn’t wanted to invite me to perform in case they couldn’t find them. I was dressed by teacher and a friend, and then taken downstairs and seated on stage between my teacher and my initial junior teacher. I was told to warm up my instrument over the appropriately provided coal heater. This process, which takes from twenty minutes to half an hour, ensures the longevity of both the reeds and the instrument. Meanwhile my teacher put a book of scores in front of me and turned to a piece that I was unfamiliar with. I looked at him and whispered “Sensei, I don’t know this piece”. “Don’t worry” he said “You know all these fingerings and the rhythm is four beats and we repeat each section twice. You enter here and exit here”. This was important information needed to play the piece, as is not written in the score. I practiced the fingering of the piece while I finished warming my instrument, and felt fairly confident by the beginning of the performance. I played the piece fairly well not making any noticeable errors, and at the end sat back to listen to rest of the performance which thankfully didn’t include my instrument. Just before the last piece, my teacher leaned over, turned to another page in the scorebook and tapped the page. I looked at my teacher in horror. The performance was still going on. I couldn’t ask him about the details of the piece!

Listening carefully as the music started I watched my teacher diligently out of the corner of my eye. Fortunately he didn’t start playing right away, which gave me time to try to hear some of the details of the piece. Then after a few minutes he slowly raised his sho to play and I started to do the same, but quickly noticed that the player on my other side of me hadn’t raised his instrument at all, so I pulled my instrument back. This was the first time that I had heard a piece where one sho started before the others. I went back to heating my sho, and now watched the other player out of the corner of my eye as I continued to listen to the details of the piece. Before long he pulled his instrument back, which I copied thinking he was going to start, but he only scratched his arm and then went back to heating his instrument. I was now fully aware of how the piece went and after the player beside me pulled his instrument back three or four times, to scratch or adjust his robe, me copying him every time, we finally raised our instruments and joined the piece. I was feeling fairly comfortable as I played except that I didn’t know how or where to end. In my limited experience, pieces usually ended somewhere on the second repeat of the last row in the notation. Thus it was a shock to find that just before I started to play a chord still in the first repeat, everyone else had stopped! I quickly pulled the sho away from my lips a millisecond before my breath started to vibrate the reeds. I slowly lowered it almost in unison with the other players hoping that no-one had noticed.

Shortly after, the whole program came to an end. My teacher looked at me smiled, and nodded. He said nothing. It was not my place to ask him why he hadn’t explained both pieces at the beginning, all that mattered was that I had played well, I had not made any obvious mistakes and I had not embarrassed the school or my teacher on this most prestigious event. Their honour was intact. Me? I was bathed in sweat, my shoulders were screaming in pain and I was an emotional wreck for days. But I did it.

It was a huge honour to be asked to perform at their inaugural New Years performance, as well as an immense amount of trust in me. Since that time I have performed often with the sho, mainly in my performances with creative improv artists such as Barry Guy, Robert Dick, Torsten Müller, Henry Kaiser, and Pauline Oliveros. I have performed Cage’s One9 for solo sho as well. I find it interesting that the trust shown to me in Japan is not extended in Canada when local presenters would prefer to fly a (Japanese) sho player in from Holland twice over hiring me to perform New Music. Yes, I know, I don’t look the part, I am not an “authentic” player, and sho is not my main instrument as I have been only playing it professionally for over 25 years… At least they decided, after discussion, to present one of my compositions for sho.

One thought on “Gagaku and Sho in Japan”